I used the Qubit’s BR (broad range) kit because I wasn’t sure what concentrations to expect. I need to use the high sensitivity kit to get a better evaluation of all the samples’ concentrations.

Ha! Well, looks like you definitely need to use the DNA High Sensitivty assay for the Bioanalyzer to pick up anything. Although, I guess you can see a slight hump in most of the samples at the appropriate sizes (~300bp); you just have to squint.

Continuing with the RAD-seq library prep. Following the Meyer Lab 2bRAD protocol.
After determining the minimum number of PCR cycles to run to generate a visible, 166bp band on a gel yesterday, ran a full library “prep scale” PCR.

Combined the following for PCR reactions:

After cycling, added 16μL of 6x loading dye to each sample.

Loaded 10μL of ladder on each of the two gels. 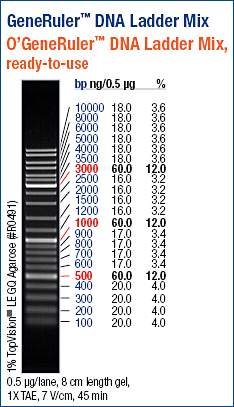 Things looked fine. Excised the bands from each sample indicated by the green arrow. Before and after gel images show regions excised. Will purify the bands and quantify library yields.

Before contacting the Univ. of Oregon facility for help with this sequence demultiplexing dilemma, I contacted Epigentek to find out what the other adaptor sequence that is used in the EpiNext Post-Bisulfite DNA Library Preparation Kit (Illumina). I used grep and fastx_barcode_splitter to determine how many reads (if any) contained this adaptor sequence. All analysis was performed in the embedded Jupyter (IPython) notebook embedded below.

This adaptor sequence is not present in any of the reads in the FASTQ file analyzed.

long barcodes: Found in ~12% of all reads

short barcodes: Found in ~25% of all reads

long barcodes, beginning of line: Found in ~15% of all reads

short barcodes, beginning of line: Found in ~1.3% of all reads

Decided to determine what percentage of the sequences in this FASTQ file have just the beginning of the adaptor sequence (up to the 6bp barcode/index):

This was done to see if the numbers increased without the barcode index (i.e. see if majority of sequences are being generated from “empty” adaptors lacking barcodes).

The analysis was performed in a Jupyter (IPython) notebook and the notebook is linked, and embedded, below.

15% of the sequences match

That’s about 3% more than when the adaptor and barcode are searched as one sequence.

The beginning of line matches are ~2% higher than when the adaptor and barcode are searched as one sequence.

Will contact Univ. of Oregon to see if they can shed any light and/or help with the demultiplexing dilemma we have here. Lots of sequence, but how did it get generated if adaptors aren’t present on all of the reads?

We recently received Illumina HiSeq2500 data back from this project. Initially looking at the data, something seems off.  Using FASTQC, the quality drops of drastically towards the last 20 bases of the reads. We also see a high degree of Illumina TruSeq adaptor/index sequences present in our data.

Since this sequencing run was multiplexed (i.e. multiple libraries were pooled and run together on the HiSeq), we need to demultiplex our sequences before performing any trimming. Otherwise, the trimming could remove the index (barcodes) sequences from the data and prevent us from separating out the different libraries from each other.

However, it turns out, demultiplexing is not a simple, straightforward task. There are a variety of programs available and they all have different options. I decided to compare TruSeq index identification using two programs:

-grep (grep is a built-in command line (bash) program that searches through files to find matches to user-provided information.)
-fastx_barcode_splitter.pl (fastx_barcode_splitter.pl is a component of the fastx_tookit that searches through FASTQ files to identify matches to user-provided index/barcode sequences.)

The advantage(s) of using grep is that it’s extremely fast, easy to use, and already exists on most Unix-based computers (Linux, OS X), thus not requiring any software installation. The disadvantage(s) of using grep for a situation like this is that it is not amenable to allowing for mismatches and/or partial matches to the user-provided information.

The advantage(s) of using fastx_barcode_splitter.pl is that it can accept a user-defined number of mismatches and/or partial matches to the user-defined index/barcode sequences. The disadvantage(s) of using fastx_barcode_splitter.pl is that it requires the user to specify the expected location of the index/barcode sequence in the target sequence: either the beginning of the line or the end of the line. It will not search beyond the length(s) of the provided index/barcode sequences. That means if you index/barcode exists in the middle of your sequences, this program will not find it. Additionally, since this program doesn’t exist natively on Unix-based machines, it must be downloaded and installed by the user.

So, I tested both of these programs to see how they compared at matching both long (the TruSeq adaptor/index sequences identified with FASTQC) and “short” (the actual 6bp index sequence) barcodes.

To simplify testing, only a single sequence file was used from the data set.

All analysis was done in a Jupyter (IPython) notebook.

NBViewer version of embedded notebook below.

long barcodes: Found in ~12% of all reads

short barcodes: Found in ~25% of all reads

long barcodes, beginning of line: Found in ~15% of all reads

short barcodes, beginning of line: Found in ~1.3% of all reads

Overall, the comparison is interesting, however, the important take home from this is that in the best-case scenario (grep, short barcodes), we’re only able to identify 25% of the reads in our sequences!

It should also be noted that my analysis only used sequences in one orientation. It would be a good idea to also do this analysis by searching with the reverse and reverse complements of these sequences.

No other changes were made to the manufacturer’s protocol.

Epigentek Barcode Indices assigned, per their recommendations for using two libraries for multiplexing:

The two libraries were stored @ -20C and will be quantified tomorrow.

Reconstituted all of the oligos and barcodes for library construction in TE (pH = 8.0) to a final concentration of 100uM. Created 10uM working stocks of all oligos and barcodes. All samples (stocks and working stocks) are stored @ -80C in their own box (Illumina Library Oligos & Barcodes) due to the fact that one of the oligos is an RNA oligo and requires storage at -80C.