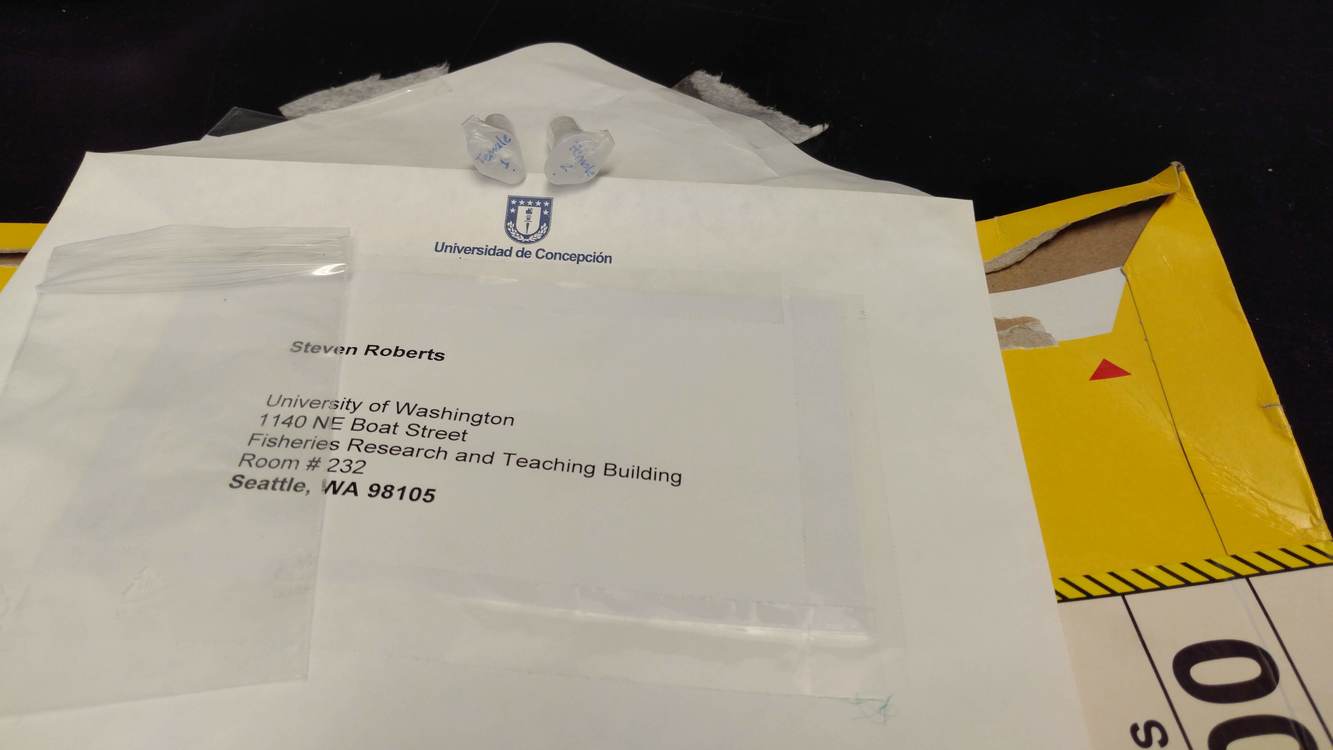 All samples were run in duplicate <em>except</em> 2h Block 1 due to insufficient DNA.

The following samples were used in a 1:10 dilution (2uL DNA : 18uL NanoPure H2O), due to their relatively high concentrations, to ensure accurate pipetting:

All samples were diluted to a final concentration of 9.645ng/uL (154.24ng total; 17.6uL) in NanoPure water, which is equal to 77.12ng of DNA per assay replicate. These numbers were chosen based off of the sample with the lowest concentration.

The following samples were used in their entirety:

Calculations were added to the spreadsheet provided by Javier (Google Sheet): A.cervicornis_DNA_Extractions(May_2017).xlsx

The spreadsheet became overly complicated because I initially forgot to account for the need to run each sample in duplicate.

The kit reagent dilutions were as follows:

All diluted solutions were stored on ice for duration of procedure.

The remaining Diluted ME1 solution was stored at 4C (FTR 209), and is stable for 6 months, per the manufacturer’s instructions.

See the Results section below for plate layouts.

Plates were read at 450nm on the Seeb Lab Victor 1420 Plate Reader (Perkin Elmer) and the amount of DNA methylation was determined.

I’m not familiar with the experimental design, so I’m not going to spend time handling any of the in-depth analysis at this point in time. However, here’s the background on how methylation quantification and percent methylation were determined.

Samples were temporarily stored at 4c (in FTR 213) until I can perform global methylation assessment on them tomorrow.

Overall, it’s difficult to really interpret these results. I believe the data is a time course (e.g. H5 = hour 5, H24 = hour 24). Additionally, looking at treatments, there appear to be replicates, but it’s not clear what type of replicates they are (i.e. technical or biological). Generally, it seems like the control samples have lower quantities of methylated DNA than the treated samples. However, this doesn’t hold true for all three of the groups.

And, not that it really matters, but I don’t even know what species this is…

In any case, this was an attempt to gather some preliminary data for a grant that Steven is attempting to put together, so the original experiment and the subsequent data aren’t as robust as one would expect for a full-blown research project.

Quantified the DNA we received from Jose on 20160615 using the Qubit 3.0 Flouorometer (ThermoFisher) with the dsDNA Broad Range (BR) Kit according to the manufacturer’s protocol. Used 1μL of each sample.

Here is a table of sample concentrations:

Will proceed with DNA methylation assessment.

Here’s the email from Jose describing the samples:

“Dear Steven, the coral DNA samples were sent today by my student Javier (cc’ed here) to your lab. Here’s an excel attached with info for the samples including concentration and treatment of the coral from which they were extracted (N, nitrogen; NP, nitrogen+phosphorous; C, control).

Please let us know when you get these in the lab so we know all is fine!

After the discovery that there wasn’t any DNA in the BS-seq Illumina library prep and no DNA in the bisulfite-treated DNA pool, I decided to try to recover any residual DNA left in the 1B2 sample. Sample 1B2 (sheared on 20150109) was dry, so I added 20μL of Buffer EB (Qiagen) to the tube. I vortexed both the 1B1 and 1B2 samples and quantified on the NanoDrop1000 (ThermoFisher). I also re-quantified the pooled BS-treated sample that had been used as input DNA for the libraries.

Sample 1B1 has ample DNA in it. Since these samples are pools of larvae, we may be able to just proceed with this sample and not worry about pooling with the biological replicate 1B2.

Pooled samples has nothing.

Will make a new pool of DNA from both 1B1 and 1B2 and attempt to make a new bisulfite-treated library.

To complement MBD ChiP-seq data and RNA-seq data that we have from this experiment, we want to generate, at a minimum, some BS-seq data from the same C.gigas individuals used for the other aspects of this experiment.  Claire had previously isolated DNA and sheared the DNA on 20140108. If possible, we’d like to perform MBD enrichment, but the current quantities of DNA may prevent us from this.

To quantify the DNA and evaluate the shearing profile, I ran 1μL of each of the following mantle pre-/post-heat shock samples on a DNA 1000 chip (Agilent) on the Agilent 2100 Bioanalyzer. in the Seeb Lab:

Claire’s notebook entry doesn’t ever specify what her target shear size was, but the Bioanalyzer analysis suggests an average size of ~500bp.

Also interesting to note is that Claire’s sample concentrations (as measured on the NanoDrop1000) are significantly greater than what is calculated by the Bioanalyzer. Since the Bioanalyzer chip used (DNA1000) only goes to 1000bp, is it possible the differences in concentrations is due to incomplete shearing of the samples (e.g. a significant portion of the DNA is >1000bp in size and thus not factored in to the Bioanlyzer concentrations calculations)?

Will check sample volumes and determine total amount of remaining DNA for each sample and then assess how to proceed next (i.e. MBD or just BS-seq).

Sample volumes were measured and total quantity (ng) of DNA in each sample were added to the spreadsheet above.

Based on the quantities of DNA we have for each sample, will discuss sequencing options (e.g. MBD or not, self-prepare libraries or not, etc) with Steven.