IMPORTANT: The cDNA used for the qPCRs described below was a 1:5 dilution of Ronit’s cDNA made 20181017 with the following primers! Diluted cDNA was stored in his -20oC box with his original cDNA.

The following primers were used:

No analysis here. Will analyze data and post in different notebook entry. This entry just contains the qPCR setup, resulting data, and a glimpse of how each primer performed.

Nothing is broken down based on sample ploidy or experimental conditions. 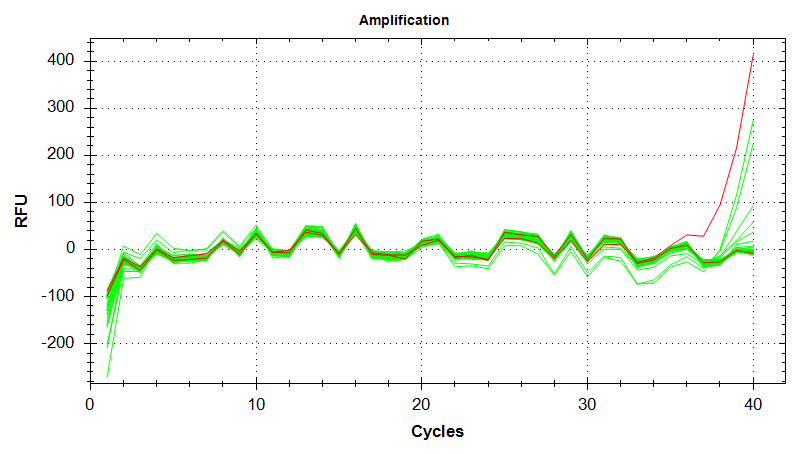 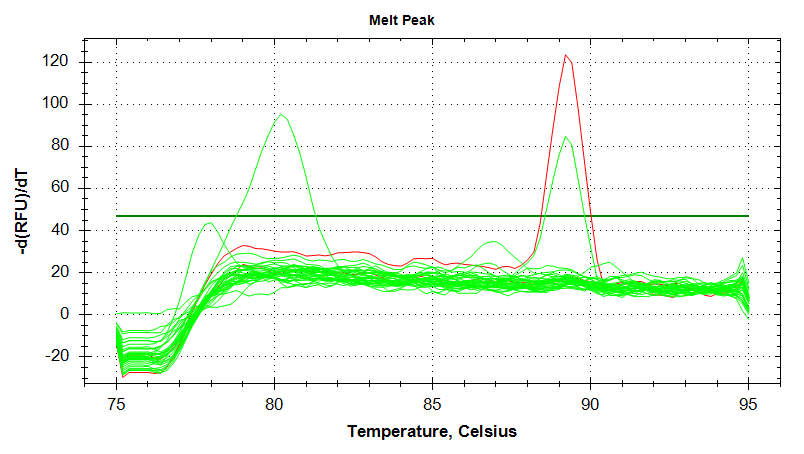 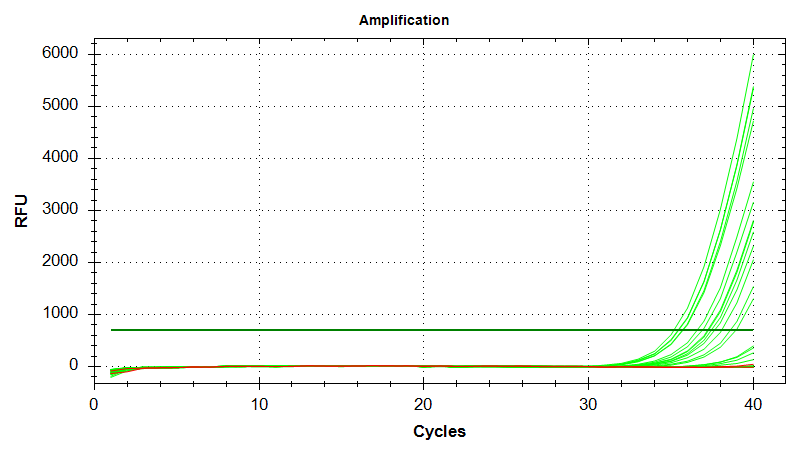 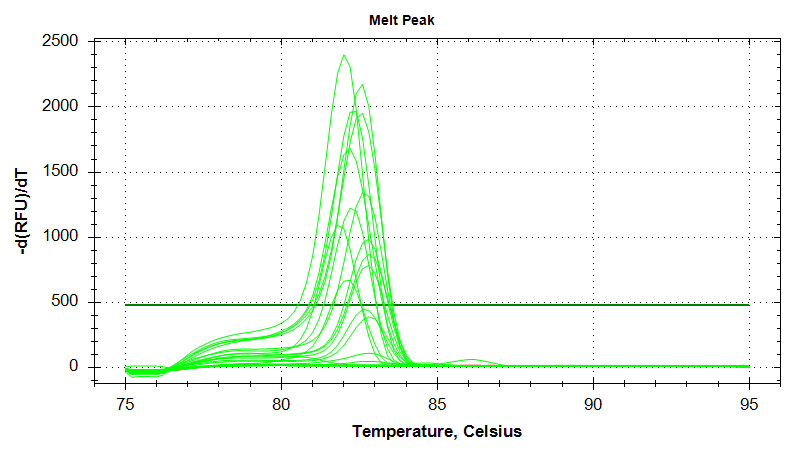 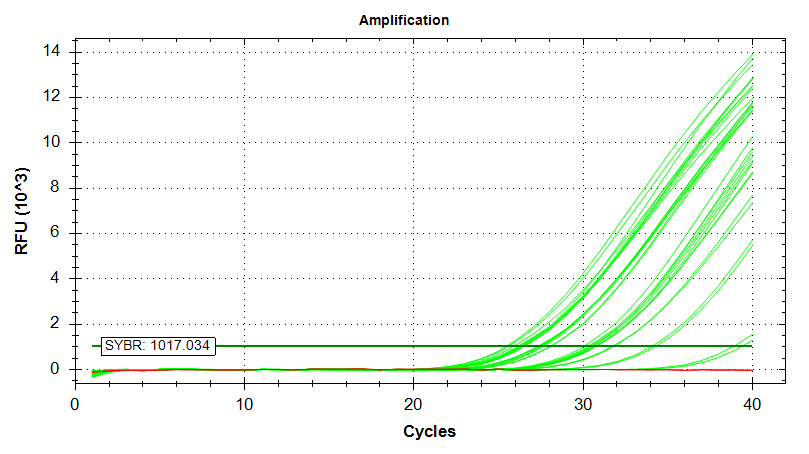 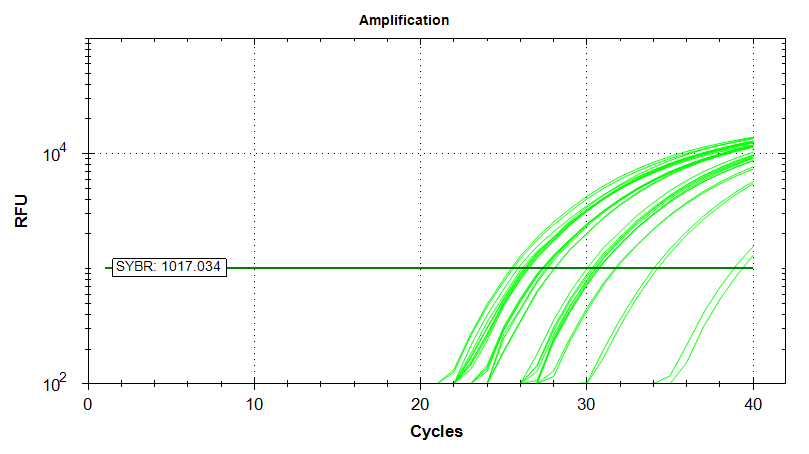 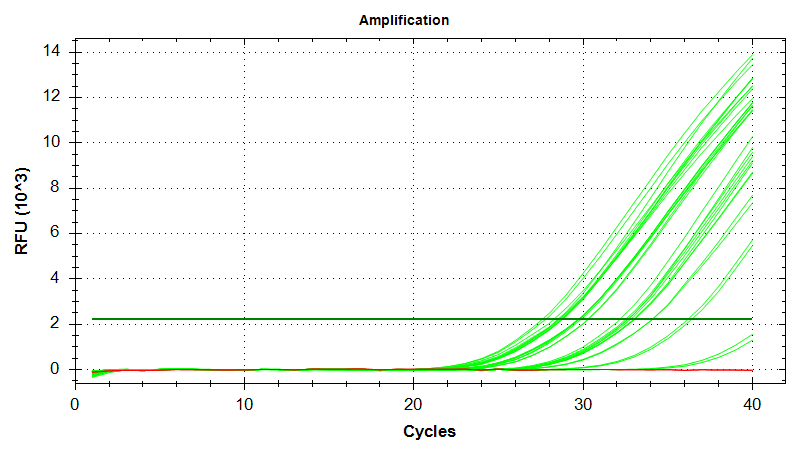 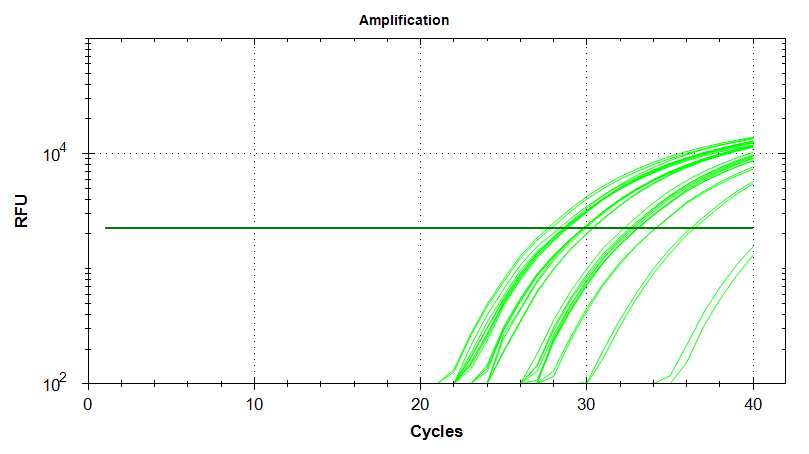 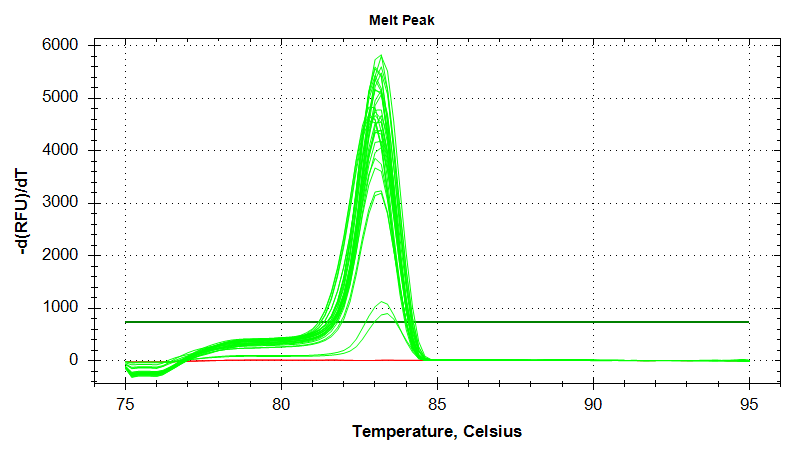 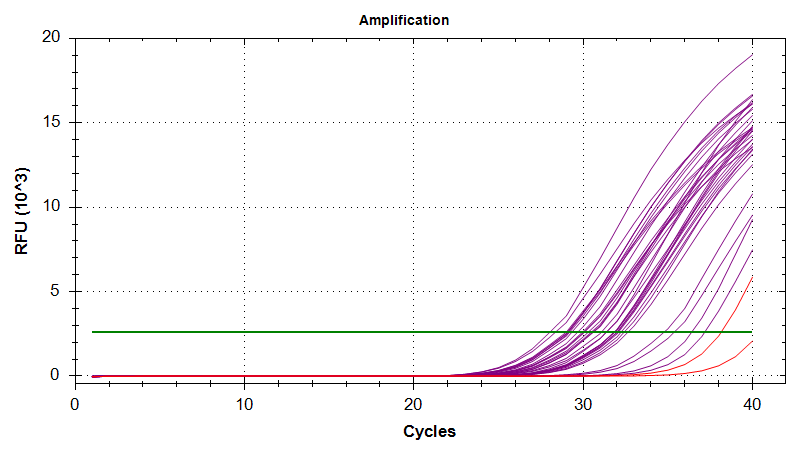 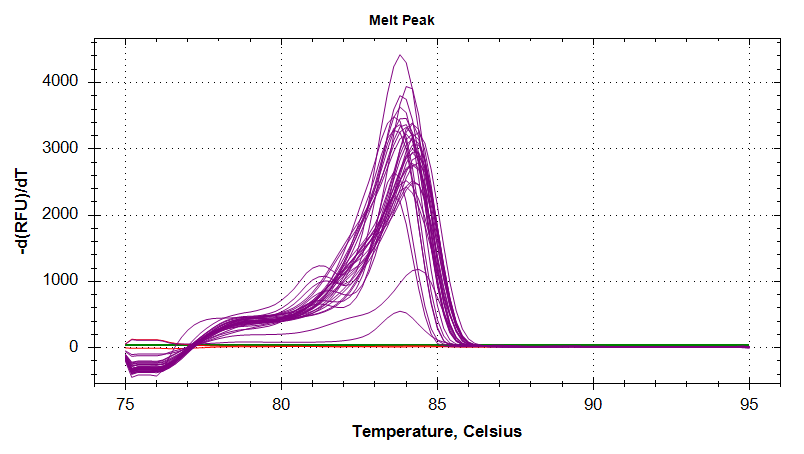 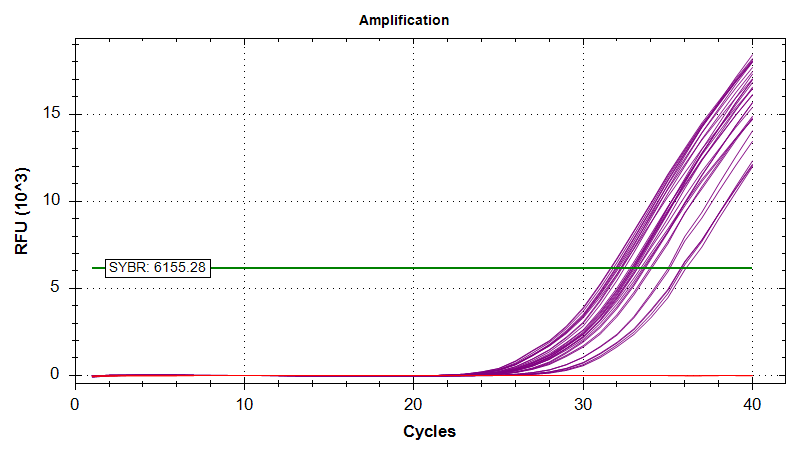 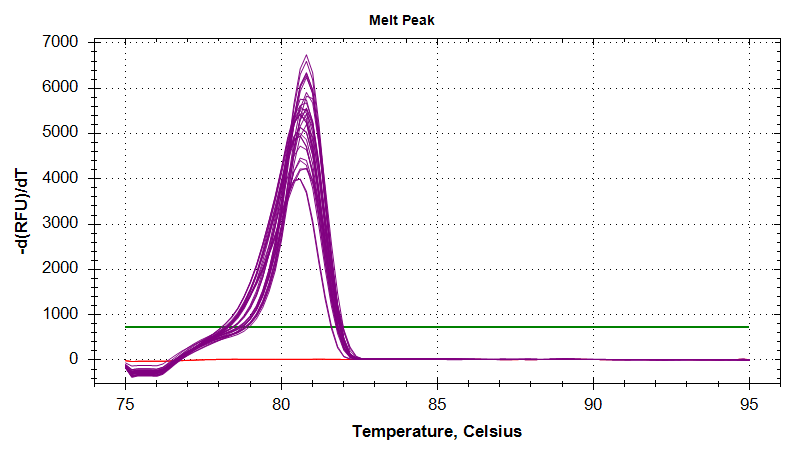 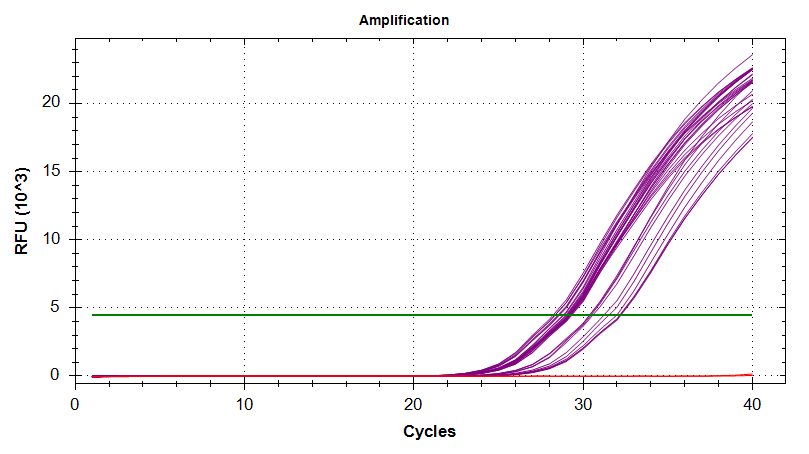 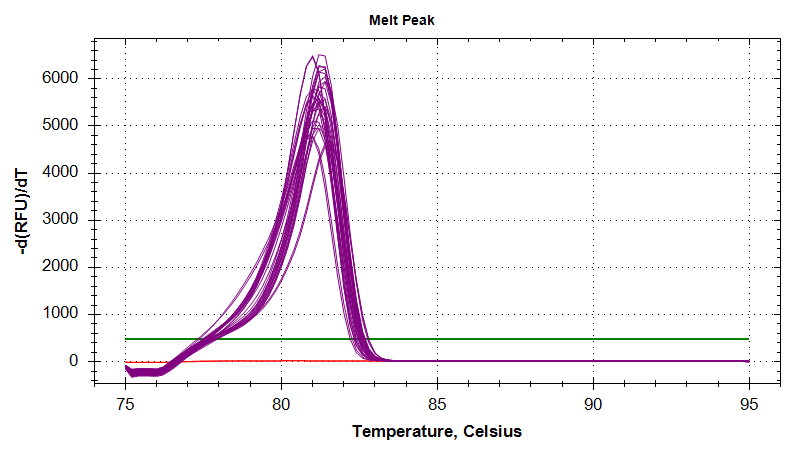 Reverse transcription was performed using 100ng of each sample with M-MMLV Reverse Transcriptase from Promega.

Briefly, 100ng of DNased RNA was combined with oligo dT primers and brought up to a final volume of 15uL. Tubes were incubated for 5mins at 70oC in a PTC-200 thermal cycler (MJ Research), using a heated lid. Samples were immediately placed on ice.

A master mix of buffer, dNTPs, water, and M-MMLV reverse transcriptase was made, 10uL of the master mix was added to each sample, and mixed via finger flicking. Samples were incubated for 1hr at 42oC in a PTC-200 thermal cycler (MJ Research), using a heated lid, followed by a 5min incubation at 65oC.

Samples were stored on ice for use later this afternoon by Ronit.

Samples will be stored in Ronit’s -20oC box.

After I figured out the appropriate DNA and primers to use to detect gDNA in Crassostrea gigas samples, I checked Ronit’s DNased ctenidia RNA (from 20181016) for residual gDNA.

In the plots below, green is the positive control, blue are the samples, and red is the no template control (NTC). 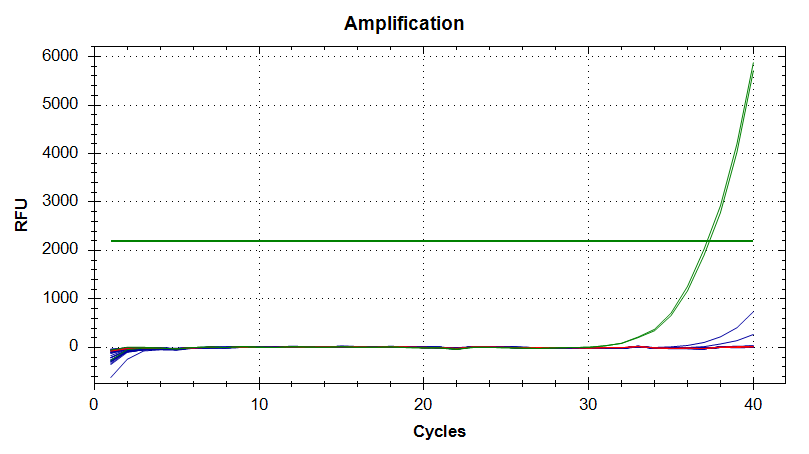 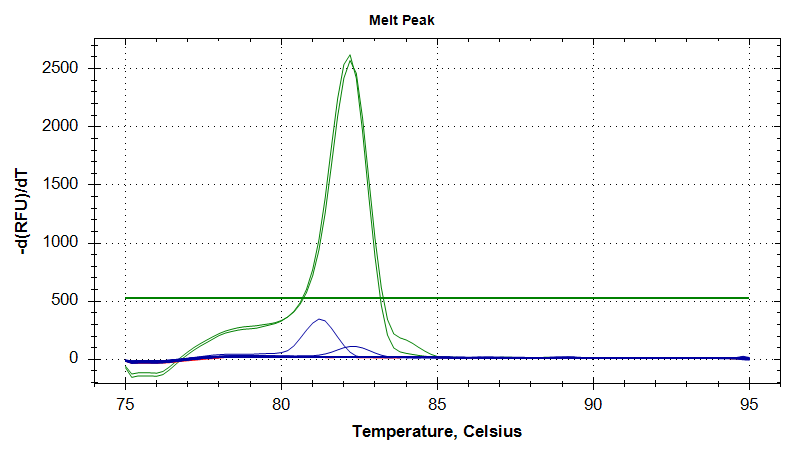 The [qPCR I ran earlier today to check for residual gDNA in Ronit's DNased RNA] turned out terribly, due to a combination of bad primers and, possibly, bad gDNA.

I tracked down some different primers for testing:

Looks like the elongation factor (EF1) primers and BB16 gDNA as a positive control are the way to go. 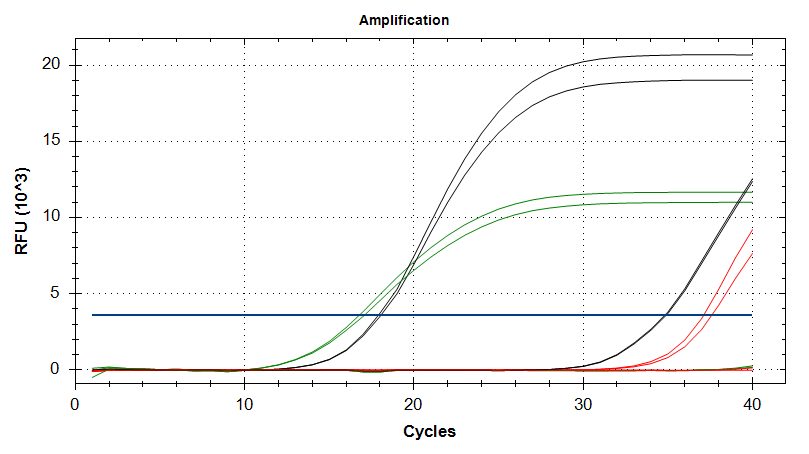 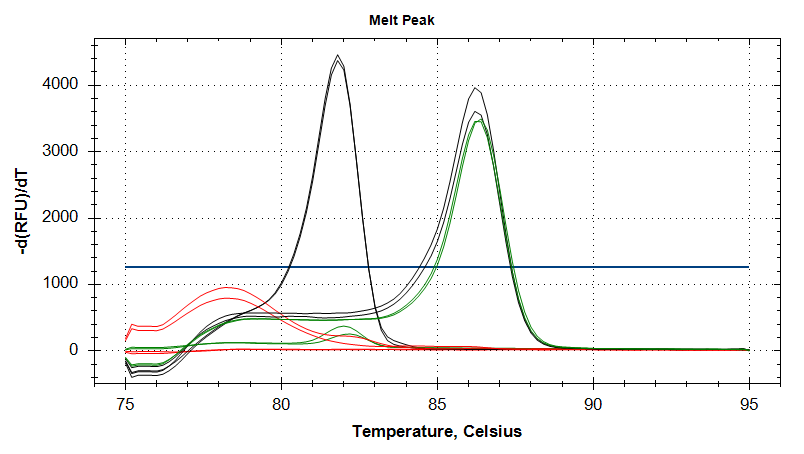 After DNasing Ronit’s RNA earlier today, I needed to check for any residual gDNA.

Well, this primer set and/or the gDNA is not good. In the plots below, the positive control gNDA is in green, samples in blue, and no template controls (NTC) are in red.

Poor performance is most easily noticed when looking at the melt curves. They have multiple peaks, suggesting non-specific amplification, even in the positive control.

Additionally, although less evident from just looking at the plots, is the replicates are highly inconsistent. Although it’s possible that might be due to poor technique, it’s very unlikely.

Will have to identify different primers and/or positive control DNA. 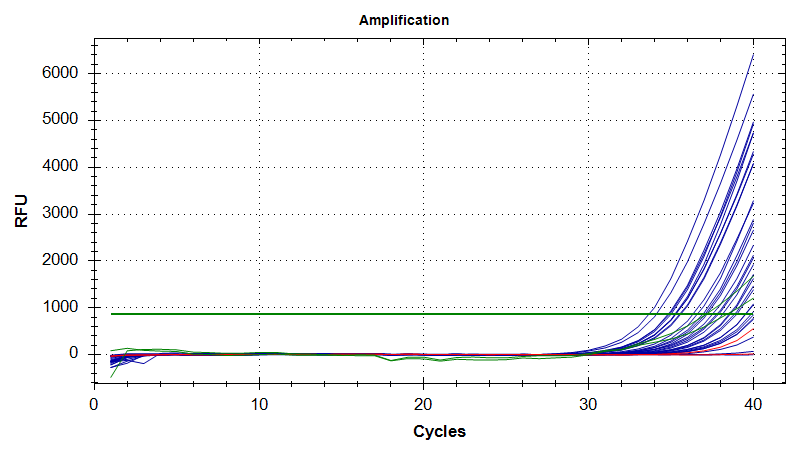 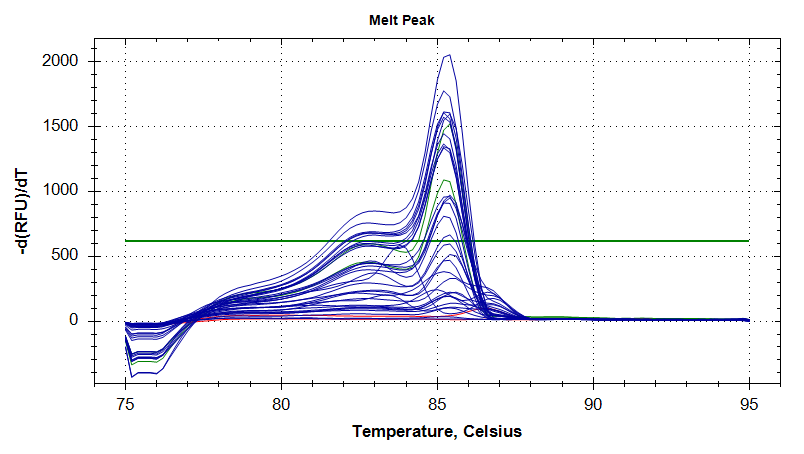 After quantifying Ronit’s RNA earlier today, I DNased them using the Turbo DNA-free Kit (Ambion), according to the manufacturer’s standard protocol.

Used 1000ng of RNA in a 50uL reaction in a 0.5mL thin-walled snap cap tube. Samples were mixed by finger flicking and then incubated 30mins @ 37oC in a PTC-200 thermal cylcer (MJ Research), without a heated lid.

Samples were stored on ice in preparation for qPCR to test for residual gDNA.

Pellet was resuspended in 50uL of 0.1% DEPC-treated H2O and stored @ -80oC in Ronit’s temporary box.

Received a bag of Pacific oysters from Nisbet Oyster Company.

Four oysters were shucked and the following tissues were collected from each:

Utensils were cleaned and sterilized in a 10% bleach solution between oysters.

Tissues were stored briefly on wet ice and then stored at -80C in Rack 2, Column 3, Row 1 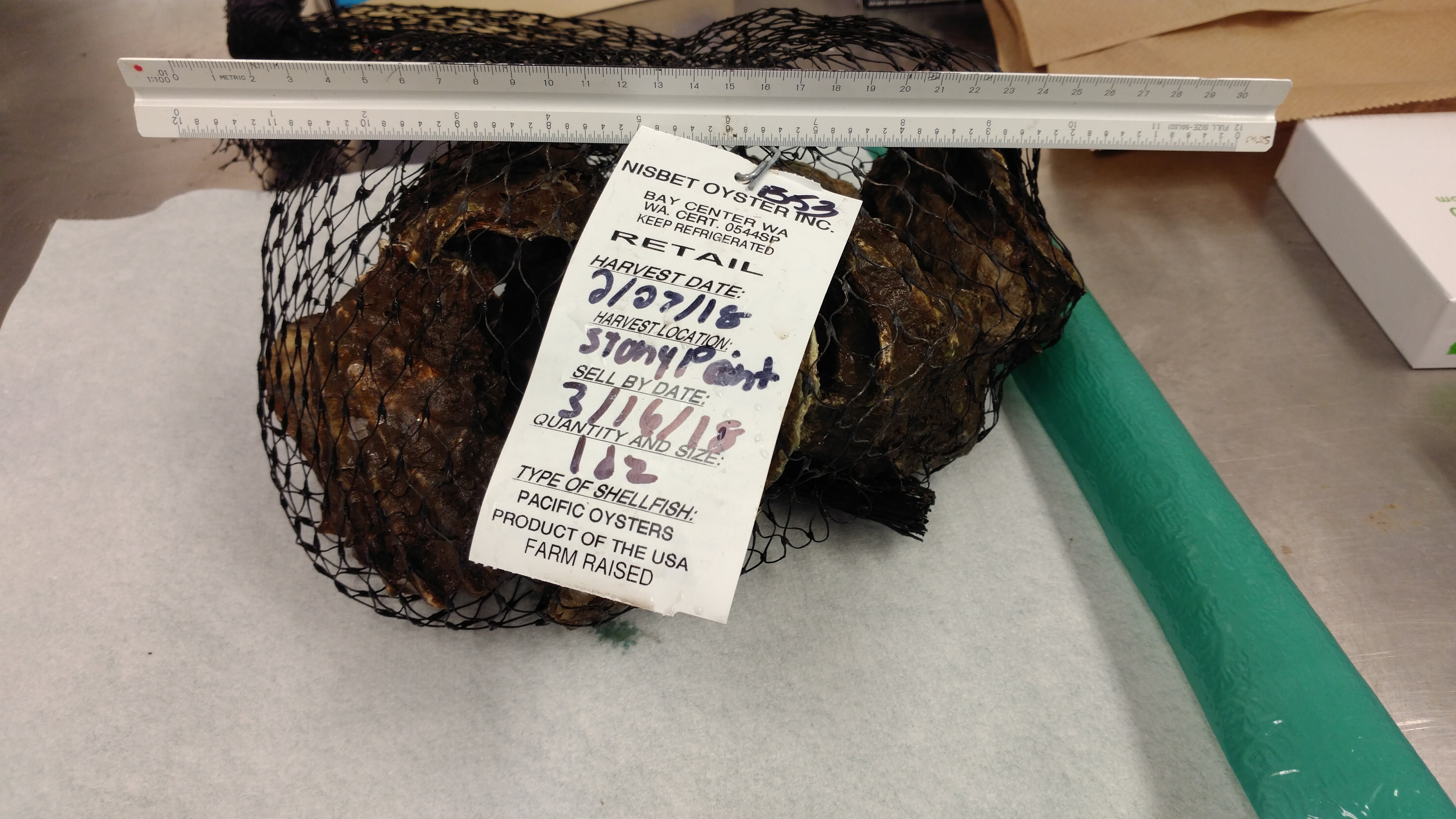 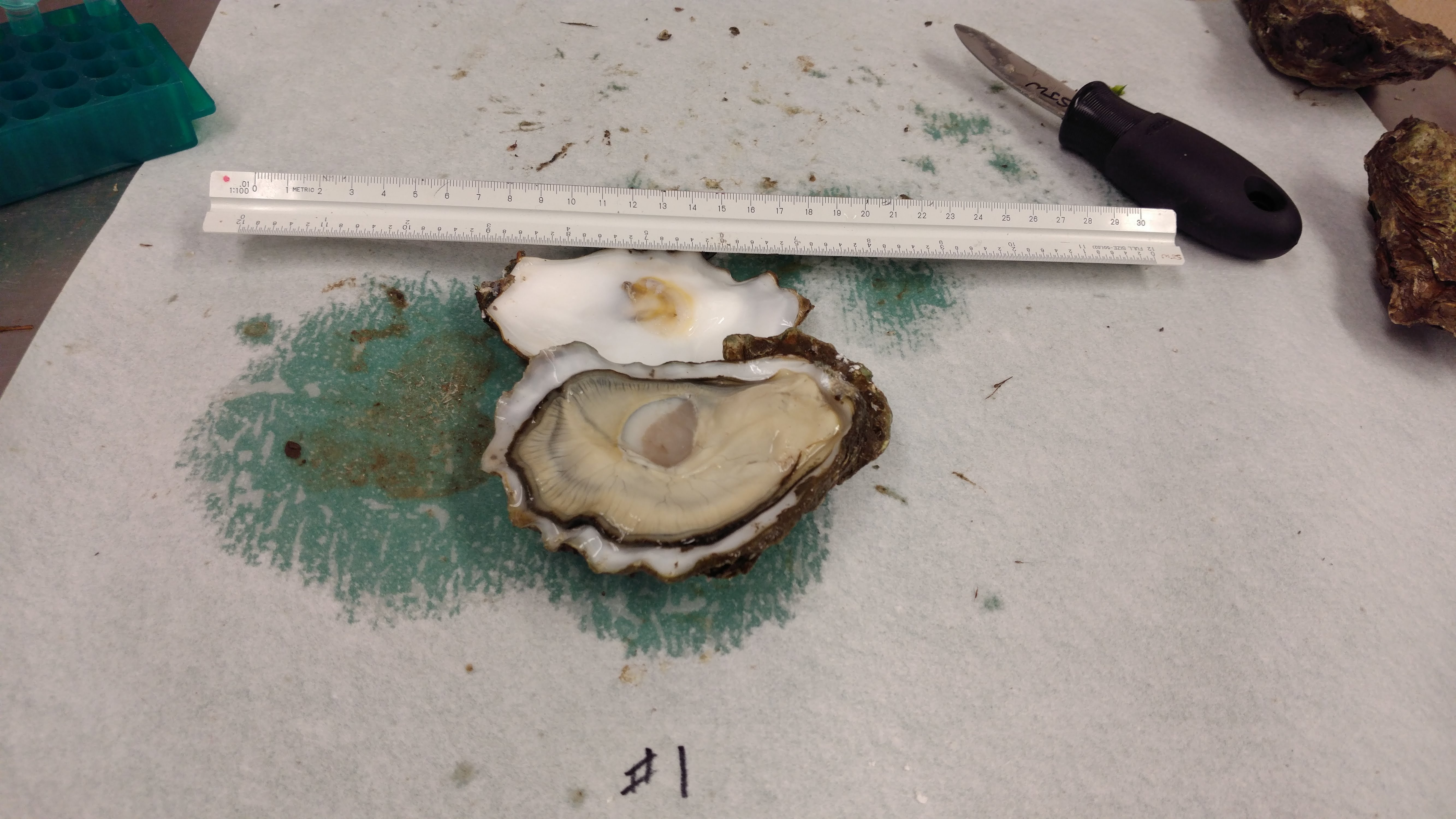 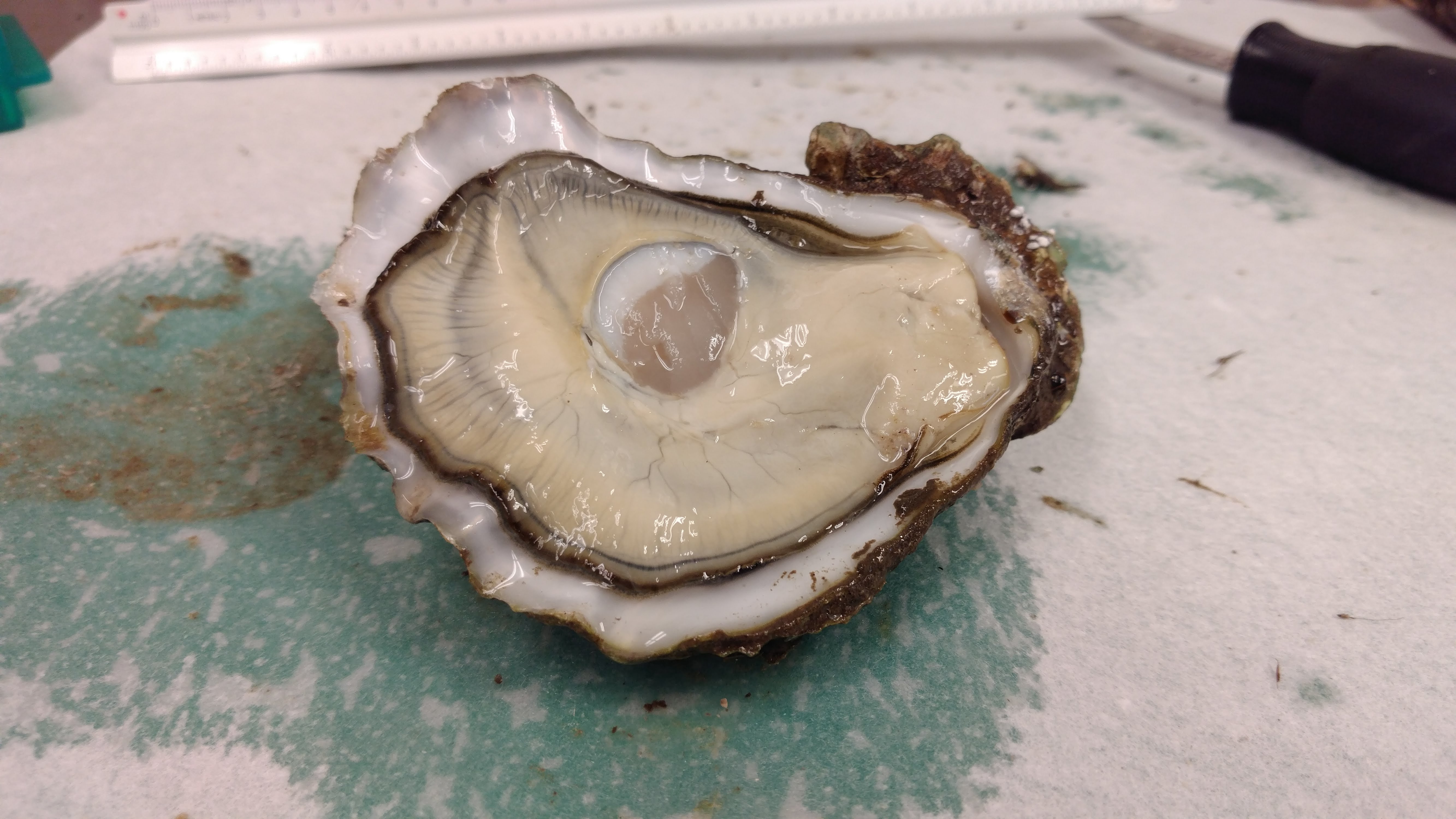 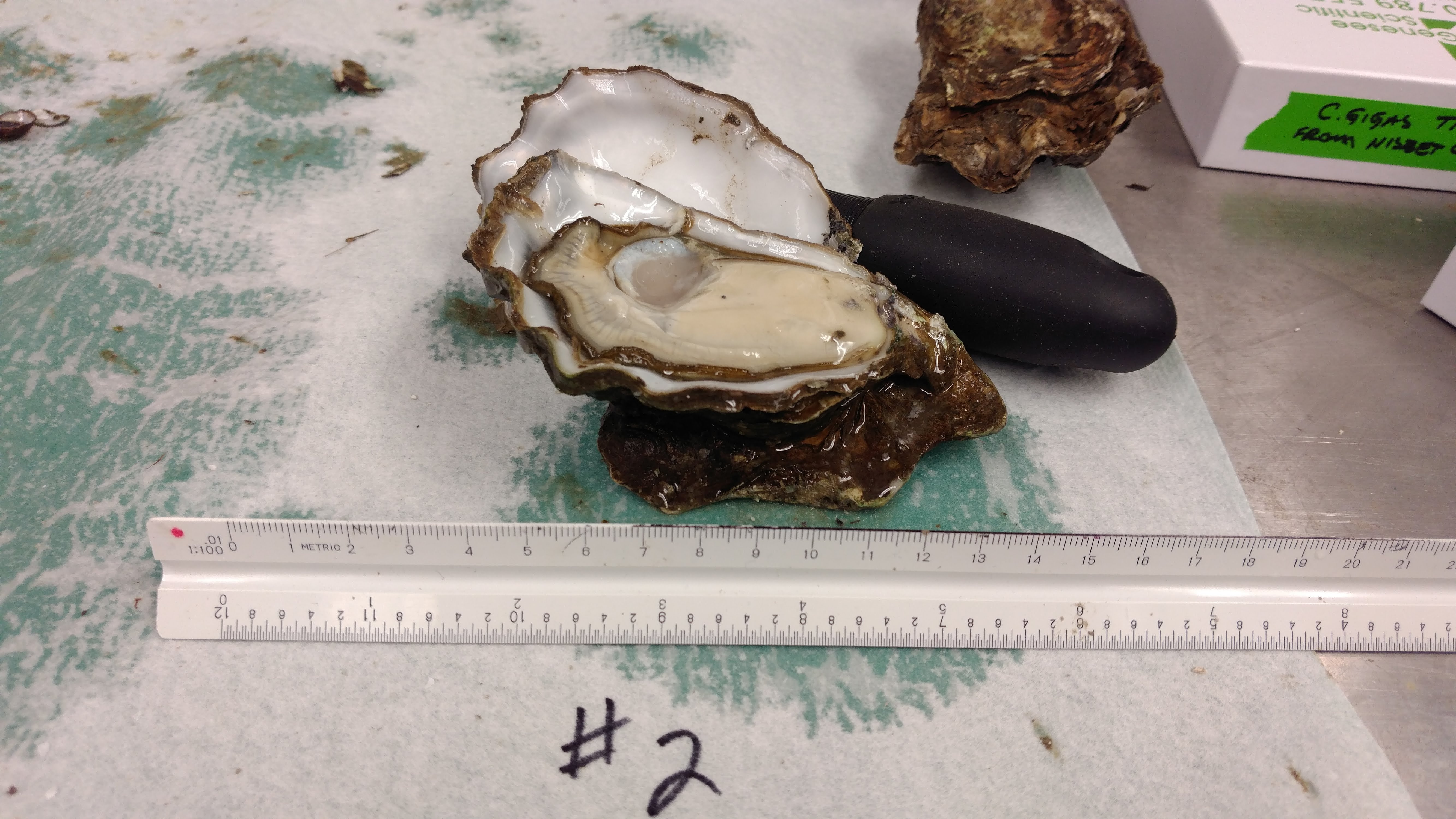 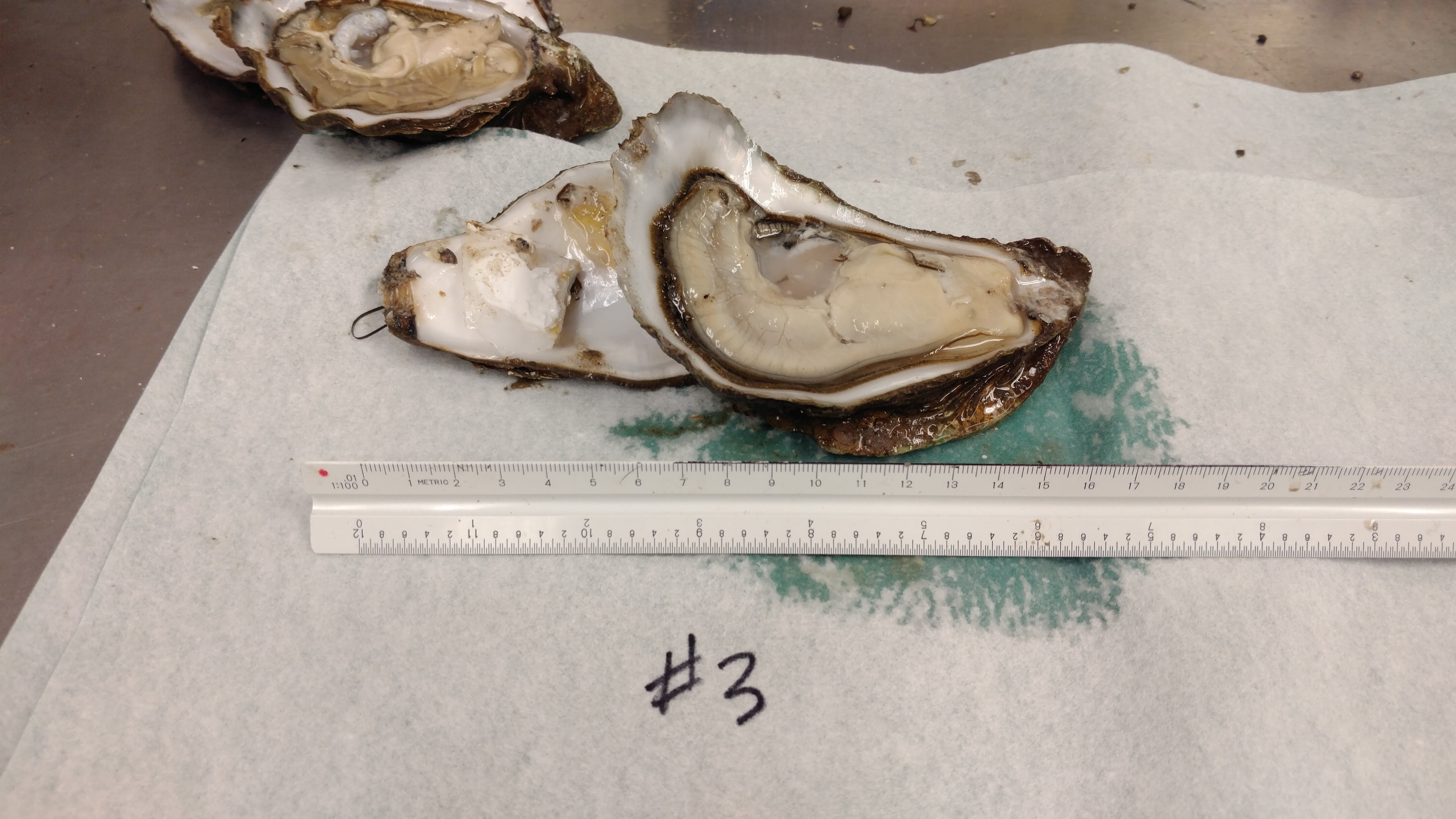 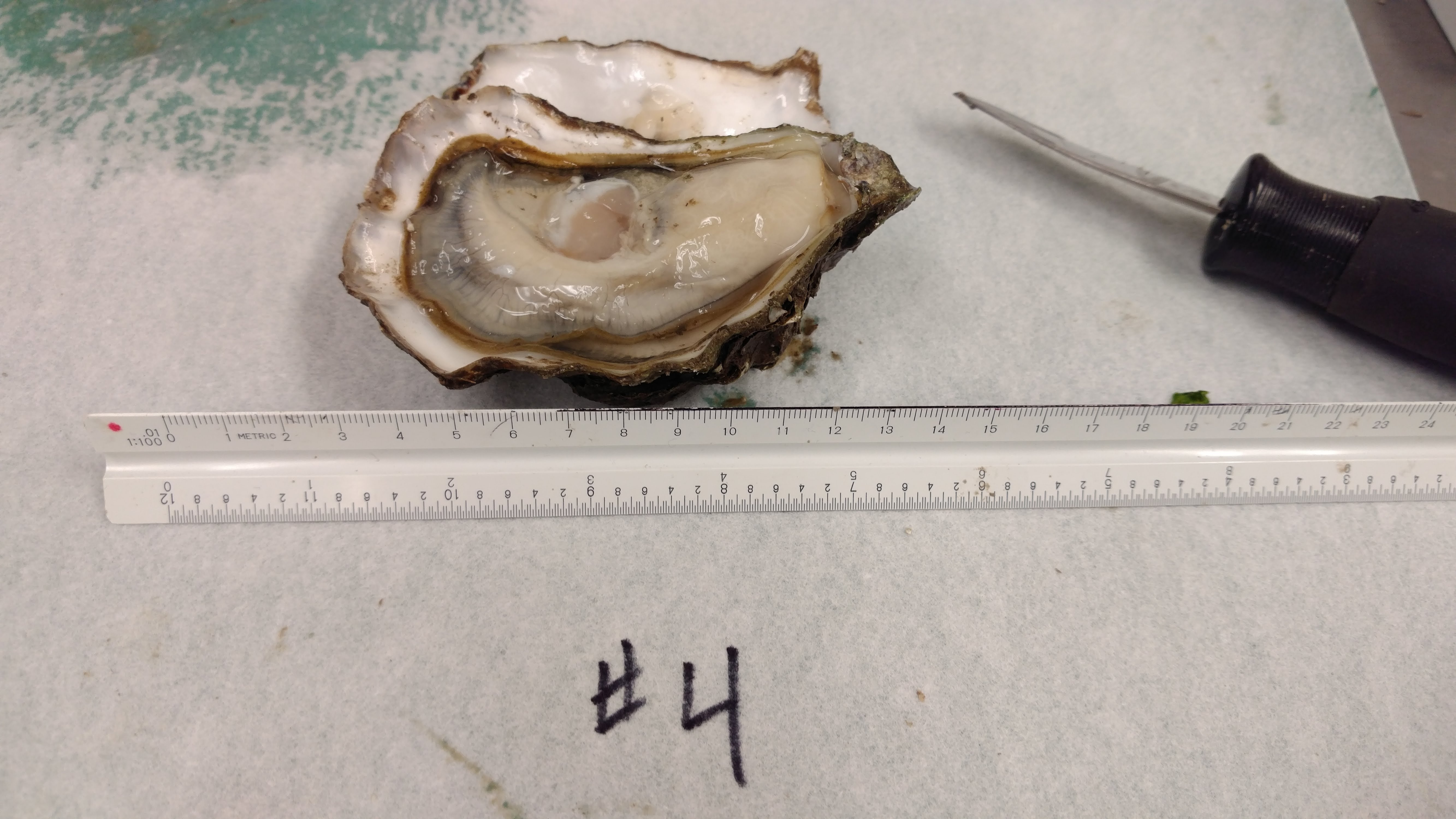 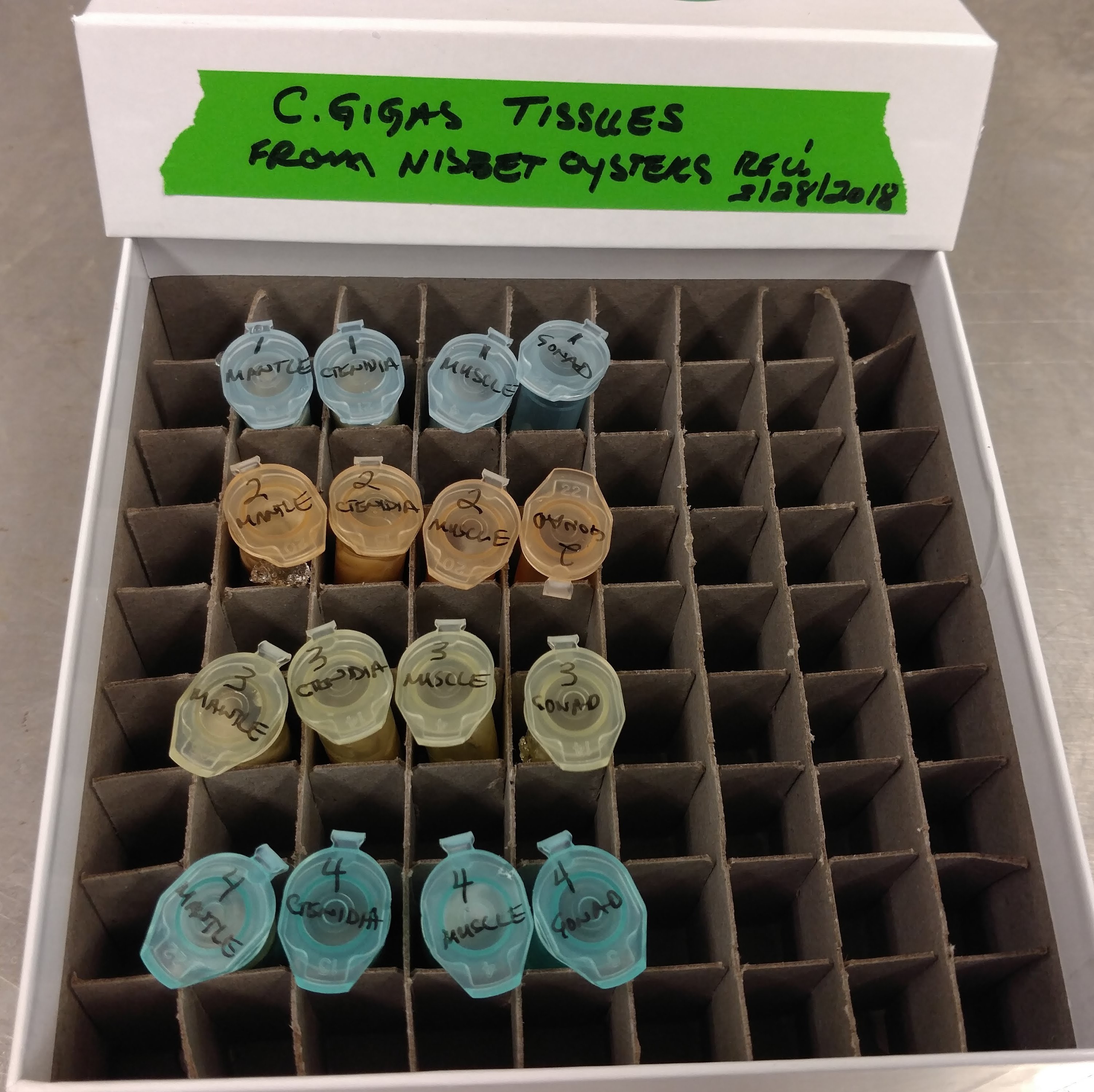 We’re working on a project with Washington Department of Natural Resources’ (DNR) Micah Horwith to identify potential proteomic biomarkers in geoduck (Panopea generosa) and  Pacific oyster (Crassostrea gigas). One aspect of the project is how to best conduct sampling of juvenile geoduck (Panopea generosa) and Pacific oyster (Crassostrea gigas) to minimize changes in the proteome of ctenidia tissue during sampling. Generally, live animals are shucked, tissue dissected, and then the tissue is “snap” frozen. However, Micah’s crew will be collecting animals from wild sites around Puget Sound and, because of the remote locations and the means of collection, will have limited tools and time to perform this type of sampling. Time is a significant component that will have great impact on proteomic status in each individual.

As such, Micah and crew wanted to try out a different means of sampling that would help preserve the state of the proteome at the time of collection. Micah and crew have collected some juveniles of both species and “snap” frozen them in the field in a dry ice/ethanol bath in hopes of being able to best preserve the ctenidia proteome status. I’m attempting to dissect out the frozen ctenidia tissue from both types of animals and am reporting on the success/failure of this method of preservation-sampling protocol.

To test this, I transferred animals (contained in baggies) from the -80C to dry ice. Utensils and weigh boats were cooled on dry ice.

Quick summary: This method won’t and I think sampling will have to take place in the field.

The details of why this won’t work (along with images of the process) are below.

First issue with this sampling method (and should be noted because I believe dry ice/ethanol baths will be used, even with a different sampling methodology) is that the ethanol in the dry ice bath at the time of animal collection is a potential problem for labeling baggies. Notice in the screenshot below that the label for the geoduck baggie (the baggie on the left) has, for all intents and purposes, completely washed off:

Starting with C.gigas, opening the animal was relatively easy. Granted, the animal has become brittle, but access to, and identification of, tissues ended up being pretty easy:

However, dissecting out just ctenidia is a lost cause. The mantle and the ctendia are, essentially, fused together in a frozen block through the oyster. Although the image below might look like part of the shell, it is not. It is strictly a chunk of frozen ctenidia/mantle tissue:

The geoduck were even more difficult. In fact, I couldn’t even manage to remove the soft tissue from the shell (for the uninitiated, there are two geoduck in the image below). I only managed to crush most of the tissue contained within the shell, making it even more impossible (if that’s possible) to identify and dissect out the ctenidia: